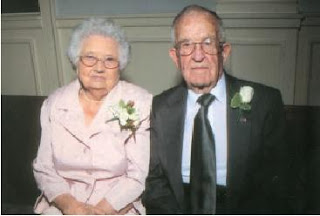 This blog is edited from the Fall/Winter '08 Our Families Magazine published by Faulkner University Cloverdale Center for Family Strengths.  The Minors are members where we attend and I serve as minister.  I asked them around the time of their 73rd anniversary what they would say to couples just beginning their marriage.  Sister Bessie smiled and said, "Tell them to stay together, that love gets sweeter and sweeter every year." Thank you, Barbara, Donald, Gail, Virginia, and Roger for sharing your parents with us. -- Scott
On September 2, 2006, exactly seventy years since their own marriage, Milford and Bessie Minor were present at the Harpeth Hills Church of Christ in Nashville, Tennessee for the wedding of one of their granddaughters. She had chosen that date to honor the love and commitment that she and the other grandchildren had always observed in the marriage of their grandparents. Milford and Bessie grew up in adjoining communities in rural Walker County, Alabama. Both knew and experienced the difficulties of farm life, especially the rough economic times as the country endured and emerged from the Great Depression. In 1922, times were very dire when Milford, at the age of seven, lost both of his parents in the flu epidemic that spread across the area. He and his six siblings were orphaned when their father, mother, and paternal grandmother died within one week. His father’s sister moved into the home and kept the family together earning what the land could produce. Bessie’s father was a cotton farmer and supplemented his family’s income by making sorghum molasses when the cotton was harvested. In 1930, Bessie’s mother died from
a debilitating illness. As the oldest surviving daughter, Bessie, at age thirteen, became housekeeper for her father and four older brothers and a mother figure to a younger sister and two baby brothers.

The major work on farms recessed for Sundays. The Lord’s Day was a day of worship and visiting other congregations for special meetings, singings, and singing schools. It was at gatherings such as these that Milford and Bessie became acquainted and became part of a group of young people that usually attended such events in the area. As they became young adults their interest in each other grew and they began
seeking time to be together. To visit Bessie, Milford had to walk several miles from his home to hers. Other times they were able to borrow the family mule and buggy for trips to church services and socials.

At the home of the local Justice of the Peace, and with a couple of friends as witnesses, Milford, age 21, and Bessie, age 19, became husband and wife on September 2, 1936. For the first two weeks of their marriage they stayed with Milford’s family. When they found a small house to rent, Milford continued to help his family with the farming and to seek extra work with anyone else who needed a worker. His pay was rarely cash because no one had money; the pay was usually in goods that could be traded. Bessie’s first cook stove was bought with 14 bales of hay that Milford had earned working for his cousin. Other needed household items came from family and friends who had something extra that they knew the newlyweds needed and could use.

In September 1938, two years after their marriage, the first of their five children was born, followed quickly by the other four. The couple recognized that more resources were required to raise and educate their children. To meet the need, Milford and Bessie left the farm and moved into the small coal mining town of Parrish, where Milford found work in the coal mines. Bessie continued her work as wife, mother, and full-time homemaker, but for the fi rst time she had electricity to make some things easier. When a teen-ager, Bessie had been baptized into Christ at the rural Central congregation in Liberty Hill where she had always attended.
When she and Milford moved into town, she became a member of the Parrish Church of Christ where she has been a faithful member since 1941. All of their children were baptized there, and in 1972, Milford, also, was baptized and is today the oldest member of the Parrish congregation where their youngest son serves as
one of the elders. Though slowed by age, and no longer able to lead in the services or teach class, Milford and Bessie are in regular attendance at the scheduled services, gospel meetings, vacation bible schools, and other special services.

Their children remain faithful in the Lord’s church. The congregations their large family attend are scattered in Virginia, Tennessee, Georgia, Mississippi, and Alabama. Four of their children and five grandchildren became
educators working in public and Christian schools. Milford’s and Bessie’s teaching example and influence continue to have great impact on their children, eleven grandchildren, and fifteen great-grandchildren.

When asked how they had been able to endure the childhood hardships, the trials of raising a large family, and be able to establish and maintain a good marriage for seventy-two (73 now) years, the answer was, “It hasn’t always been easy, but we took a vow to love, honor, and cherish as long as we both lived and we know and understand what a vow is.”
Posted by Scott at 9:11 AM 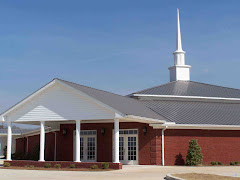